I share with you what, for me, are the best and most interesting exhibitions in Paris at the moment. Thus, I complete the series beginning with the Exhibitions in Madrid,  New York, and London. As in previous articles, I remind you that you can save this page as the exhibitions will be updated periodically. 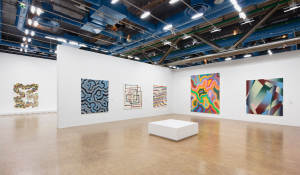 This exhibition is the first solo exhibition of the North American sculptor Charles Ray in Paris. It is a retrospective organized in two venues simultaneously: the Pompidou Center and La Bourse de Commerce – Pinault Collection. Ray’s work is concise and concentrated, made up of only one hundred pieces. However, the richness of his reflection on him and his striking aesthetics have made him a paradigm of contemporary sculpture and conceptual art. The artist asks the viewer a specific question: “what is sculpture?” And at the same time, he raises answers that lead to new questions. The result is a body of work that affects the concept of space and reality, essential to understanding the evolution of current sculpture.

On the occasion of the temporary closure of the headquarters of the Frick Collection, one of the most important in the United States, a selection of works by the American painter James McNeill Whistler (1834-1919) travels to the Musée d’Orsay in Paris for its exhibition. After traveling to London and settling in the British capital, Whistler established fluid and close communication with the Parisian artistic circles, becoming one of the referents of the symbolist movement. The exhibition brings together a total of 22 pieces, divided into four canvases, three pastel drawings, and three engravings, which are exhibited together with three paintings belonging to the French museum’s collections. Among the pieces, you can admire masterpieces such as the famous symphony in Flesh and Pink: Portrait of Mrs. Frances Leyland, or the magnificent landscape Symphony in green and gray: The ocean, painted during a trip the artist made to Chile.

A total of 200 masterpieces from the European avant-garde era make up this magnificent exhibition, which has been extended until April. The pieces are part of the collection of the brothers Ivan and Mikhaïl Mozorov, who at the beginning of the 20th century brought together a series of paintings and sculptures created by Russian and French artists. The exhibition is an unmissable opportunity to see iconic pieces live, by artists such as Van Gogh, Gaugin, Manet, Cézanne, Malevich, and Goncharova, among many others. To round off the exhibition, the Louis Vuitton Foundation has recreated the Music Room that Ivan Mozorov had in his own mansion. A monumental installation made up of seven panels that reproduce those made by Maurice Denis to tell The Story of Psyche, and four reproductions of the sculptures made by Aristide Maillol.

George Baselitz is one of those artists who follows his own path, taking references from the avant-garde and artistic schools of his time but without giving up seeking his own goal. His paintings by him mix figuration and abstraction, color and gesture, remaining in constant evolution and drawing on the imagination of painters such as Munch, Dix, or De Kooning. That season, the Center Pompidou organizes the first retrospective of the artist carried out by the museum to date, with a large selection of works organized chronologically. The center exhibits his early paintings by him, but also his works by him from the 1960s (such as the Pandemonium Manifesto) and works made in later decades. Deeply marked by the terrible conflicts that devastated Europe during his childhood and adolescence(“I was born in the midst of a destroyed order, in a ruined landscape, a ruined town, a ruined society”), his trajectory always moved away from self-destruction to investigate new avenues for evolution and growth.

The trajectory of the painter Gonzalo Chillida goes from a figuration inspired by the landscape, to an abstraction where the line and the planes of color generate elegant compositions. Trained in Madrid and Paris, at the time I have moved away from the most groundbreaking movements of the plastic scene to follow an independent path, in which modernity emerges from work and contemplation. The exhibition that opens at the Cervantes Institute in Paris, curated by his daughter Alicia Chillida, traces a complete journey through his work by him through 34 paintings, 11 lithographs, and nearly 180 photographs and photocollage compositions. Together with them, the film The Idea of ​​the North is screened(2006), directed by Alicia Chillida and Benito Macías, which analyzes and captures the creative process of the painter, draftsman, and engraver.

“For me, space is a material. Articulating space has become my main concern, above other concepts. I try to use sculptural forms to create distinctions in space”. The words of the artist Richard Serra perfectly describe his work by him Transmitter, a monumental corten steel sculpture installed in the room that the Gagosian gallery maintains at the Paris-Le Bourget Airport. The piece measures 4 meters high, 18 meters long, and 18 meters long, and continues the artist’s investigation into defining spaces through the creation of large-scale forms. The installation is complemented by a three-day retrospective of videos and films made by Serra, to be held at the Center Pompidou in early 2022.