Paintings and all kinds of famous works of art arrive, ultimately, without warning. They take the world by surprise and settle into the collective memory, with an appeal that transcends eras, periods, trends, and styles. There is no general consensus about what makes them so special, nor does there seem to be a “secret recipe” with the exact ingredients to make one to measure.

They are paintings whose popularity not only depends on how skillful their creator is with a certain technique (in many cases, their authors were even innovating when creating them or going through altered states of being) but also seem to respond to a whole series of factors. that they could strike a chord with a 16th-century person as much as they do with a 21st-century person today. 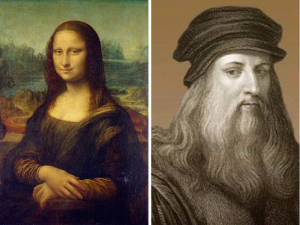 I think we can agree that this painting is widely recognized internationally. Such is its fame that it has become a popular icon that identifies not only painting but fine arts in general.

It was painted between 1503 and 1517. This well-known portrait of Leonardo Da Vinci has been stubbornly haunted by two questions since the day it was published: Who is the woman portrayed? and Why is she smiling at her?

Around this, a number of theories have emerged over time: That it is the wife of the Florentine merchant Francesco di Bartolomeo del Giocondo (thus explaining the alternative name of the work, La Gioconda); that she is Leonardo’s mother, Caterina, conjured from Leonardo’s childhood memories; and finally, that it is a self-portrait in which she visualized herself as a woman.

It is definitely another one of those undisputed famous works of art. Exceptionally famous, in fact. This is the reason why we can see it in bags, cups, umbrellas, and all kinds of objects. It is a testament to his fame and popularity.

It represents a scene that Van Gogh perceived during his stay in a sanatorium. If there’s one thing we all also know about him, it’s that his mental health wasn’t particularly good. It could be said, sadly, that they are equally famous for the fact that he tried to cut off his ear from him and eventually ended his own life.

The Starry Night or “La Noche Estrellada” uses a strong color palette, with great energy that comes from the swirls created with its brushstrokes. These characteristics have had an influence on generations of artists, making Van Gogh one of the most recognized and influential painters in Western art.

The first thing to know about “El Grito” is that it is not a single work of art. According to the British Museum blog, there are two paintings, two pastels, and an unspecified number of prints. The paintings reside in the National Museum in Oslo, Norway, and in the Munch Museum, and in 2012, one of the pastels sold for nearly$120 a million at auction.

Also, as in the case of The Mona Lisa, both versions of the painting have been saved from attempted thefts (in 1994 and 2004) which, of course, only ended up drawing more attention from the general public to this work (in both cases). , the paintings were eventually found).

There is a very important fact that is present in the essence of this painting and that without a doubt can be somewhat surprising: Did you know that the androgynous figure in the front of this Art Nouveau piece is not producing the scream but rather trying to block a piercing scream coming from nature? It is inspired by an experience of Edvard Munch himself in which, during a sunset walk in Oslo, a dramatic red hue overwhelmed his senses from him and he heard a loud scream.

“The Kiss” (German: “Der Kuss”) is a work painted by the Austrian Symbolist Gustav Klimt, between 1907 and 1908, at the height of his “Golden Period”, when he painted a number of works in a style that included the use of gold leaf in oil paintings.

It is a perfect square, whose canvas portrays an embracing couple. Their intertwined bodies are covered in elaborate clothing in a style influenced by the linear constructions of the contemporary Art Nouveau style and the organic forms of the Arts and Crafts movement of an earlier period. The work is basically oil paint with thin layers of gold leaf applied, a look that gives it that strikingly modern, yet evocative look.

Guernica is probably Picasso’s best-known painting. Although this great painter has many famous works of art in his repertoire, the background of this one is something very particular.

It is a painting that tells us about the deep pain generated by the bombing that occurred in 1937 in the Basque city of Guernica during the Spanish civil war, orchestrated by German and Italian warships that were allied to the fascist leader Francisco Franco. The left-wing government that opposed him commissioned this anti-war “cris de coeur” from Picasso for the Spanish Pavilion at the 1937 World’s Fair in Paris.

“The Girl with a Pearl Earring”, “Girl with a Turban” or the “Mona Lisa of the North,” is a painting created in the 17th century by the artist Johannes Vermeer. It is said to be a deceptively simple portrait, but highly enigmatic.

No name is given and all the viewers see is a girl wearing a pearl earring and looking back. Speculation about the identity of this young woman ranges from identifying her as Vermeer’s maid to believing her to be one of her 15 children.

In this well-known work, the girl’s hair is tied back with a blue band that contrasts with the gold of her dress, which is offset by the dark background giving the painting its luminosity. Her mouth is ajar as if she is about to ask something, but that is something we can only imagine. Her thoughts of her, maybe even her voice of her.