Frida Kahlo’s paintings, in addition to her phrases, recipes, letters, and photographs, whisper in our ears to tell us stories about Frida herself, about what happened in her stormy life, full of disappointments, infidelities, and injections. And of course, they tell us about a Mexico on the way to finding itself, wounded and “empty” by the Revolution, constantly fighting against US influence and corrupted from within.

We have talked extensively about the woman with the flowers on her head, the exposed hearts, the prominent eyebrow, and the damaged spine. Multifaceted, with feelings on the surface, the quintessential Mexican artist has served as a standard-bearer not only for Mexican art but also for global feminist movements.

Painted in 1929, the painting shows the diversity of social classes in Mexico onboard a bus: a housewife with her shopping basket, a worker dressed in blue overalls, an indigenous mother breastfeeding her baby, a child, a Capitalist “gringo” and a young woman who looks a lot like Frida. Some scholars of the artist affirm that it could be a reference to Frida’s accident in 1925, in which she suffered serious injuries that marked her life and her career. In that year, the bus in which Frida was traveling collided resoundingly and a handrail dug into Frida’s chest. That day, a man in blue overalls withdrew her handrail, saving her life, while the gold dust that a “gringo” brought with him, spread over Frida’s bleeding and naked body. 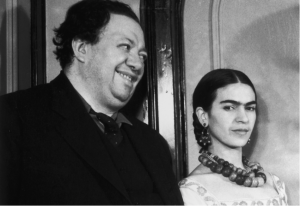 Frida painted this double portrait in 1944, as a gift for Diego on their fifteenth wedding anniversary. The dates mark the years of marriage, except for the period from 1939 to 1940 in which they were separated. The branches of the leaves join the faces of the spouses who are shown as different sides of the same face. The relationship of the spouses is reiterated with the moon and the sun, and the shell and scallop.

Self-portrait in a velvet suit

This is Frida’s first self-portrait. Painted in 1926, it was a gift for her boyfriend and her classmate at her school, Alejandro Gómez Arias, who had ended their love relationship. Frida gave her this portrait with which she hoped to recover her affection, which worked as the couple reconciled.

Self Portrait with Necklace of Thorns

In this painting, Frida is placed in the center of the painting to enhance her presence. She highlights the fact that she has stretched out Christ’s crown of thorns and wears it as a necklace, along with a dead hummingbird that simulates Frida’s eyebrow. On her left shoulder is a black cat that seems to be stalking the hummingbird’s carcass; On her right shoulder is a monkey, a gift from Diego. Frida painted a self-portrait to give to her lover, the photographer Nickolas Muray. However, after divorcing Rivera, she had to sell the painting to hire a lawyer. To replace it, Ella Frida painted this self-portrait.

“I don’t have the slightest hope anymore… Everything moves to the beat of what the belly contains.” This phrase is written behind the painting that dates from 1945, when Frida had to rest completely and maintained a diet of purées every two hours to make her fat, because the lack of appetite, as a result of operations and illnesses, had left her extremely thin. . Frida portrayed in this oil painting a wooden structure that supports a funnel that feeds it continuously, highlighting the sugar skull at the top of the funnel and the blanket that covers her body decorated with microscopic life.

Self-portrait on the border between Mexico and the United States

Frida accompanied Diego on his artistic adventure through the United States during the 1930s. Nostalgic for her country, Frida painted this painting in 1932, in which she shows her mixed feelings towards the United States, and the center of the image remains as if I were a statue on a pedestal between different worlds. She holds a Mexican flag on her right side, on which there are multiple allegories of Mexico: natural colors, plants, pyramids, and pre-Hispanic pieces. On the left side of it, are symbols of the United States: gray colors, the American flag, a large factory, and skyscrapers. The pedestal reads “Carmen Rivera painted her portrait in 1932”; Carmen was Frida’s baptismal name.

Dressed as a Tehuana, Frida painted in 1943 a portrait of Diego on her forehead, who at the time had multiple infidelities, while Frida developed an obsessive love for him, with the only desire to possess him in his entirety.

This work, painted in 1945, was commissioned by Don José Domingo Lavin, who asked the artist to read the book Moisés, el hombre y la religion monoteísta by Sigmund Freud, and then paint his interpretation. In it appears the central figure of a baby who looks like Diego Rivera and whose birth is represented under a sun, provider of life and escorted by gods and heroes of humanity, all embraced by the hands of death that embrace everything.

There I leave my portrait, so that you keep me in mind, every day and night, that of you, I am absent. Sadness is portrayed in all my painting but that is how I am, I no longer have composure”, “the rete deer walked alone, sad and very wounded until in Arcady and lina it found warmth and a nest”.

A wedding present for her friends Lina and Arcady Boyter, Frida painted this painting in 1946, in which she painted herself with the body of a deer and its head crowned with antlers. The deer is pierced by arrows and bleeding, facing the viewer, while behind him is an escape route. Scholars of the artist have affirmed that the meaning of this work lies in Frida’s disappointment after a spinal operation that could have meant a cure for her back pain, but on her return to Mexico, the physical pain did not end.

Eight days before her death in 1954, Frida took the brush, dipped it in the red paint, and wrote “Viva la Vida – Coyoacán 1954 – México”. Based on the paintings of her later years, in poor health due to her condition and constant injections of Demerol and Morphine, Frida could have painted this painting in 1952. However, when she was convinced that her days were numbered, she decided to write about painting, by way of farewell.